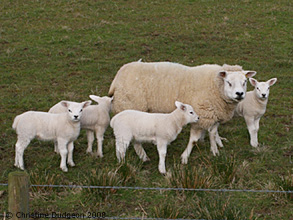 Two unusual points with this year’s lambing were –

Many had nearly 90% of the flock lambed in 3 weeks.  One producer who used teasers, lambed half of his 1,200 flock in just 3 days!

Advantages Of Having A Short, Tight Lambing Period

For small flocks the advantages greatly outweigh the disadvantages.  However in large flocks (over 1,000 ewes?) disadvantages become more significant.  For example a potential peak lambing rate of 8% of the flock per day would require 160 individual pens for a flock of 2,000 ewes.  Building in a safeguard against bad weather to keep ewes and lambs in for 2 days would increase this to over 300 pens.  This is one reason why the majority of very large flocks are based on lambing at grass utilising easy lambing genetics.